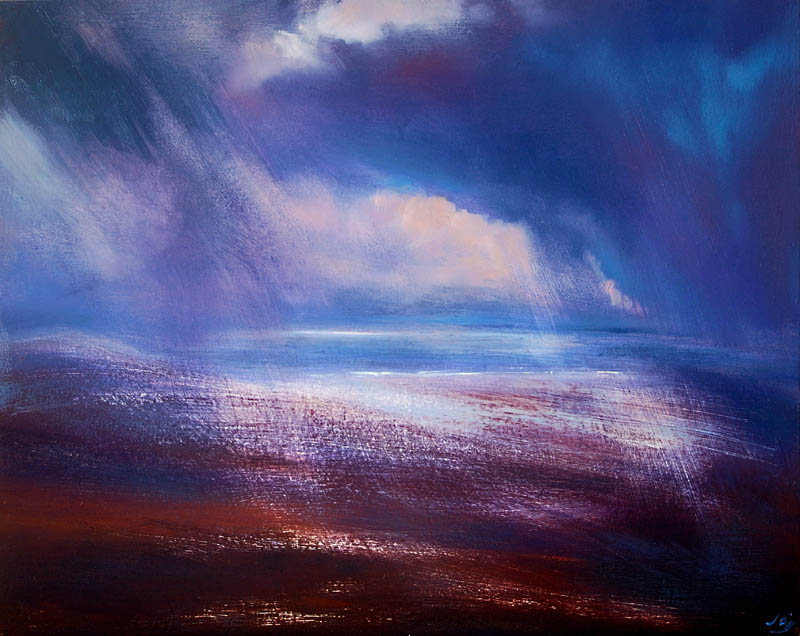 A road crosses high over the top of the stark and beautiful lunar landscape of the Burren on the West coast of Ireland.

I was on this road one time and the weather had moved in off the Atlantic.

The rain was coming down hard and heavy, the visibility was terrible and the wipers were slapping back and forth on the windscreen trying to keep up with pushing the water away.

I slowly edged my way to the summit.

The limestone stretched out to the left and right and the grey clouds sent sheets of grey rain sweeping across the road.

As I started my descent the clouds suddenly opened. The sheets of rain kept falling but through the fine veil, I saw the limestone stretching out before me and they were turning light and dark as the clouds moved across it and in the distance, the light was playing off the sea.

This is my memory of that heart stopping moment when the clouds were swirling around me and I felt I could touch the sky.

Seamus Heaney wrote a poem called ‘Postscript’ which mentions the play of light in this part of the world:

And some time make the time to drive out west
Into County Clare, along the Flaggy Shore,
In September or October, when the wind
And the light are working off each other
So that the ocean on one side is wild
With foam and glitter, and inland among stones
The surface of a slate-grey lake is lit
By the earthed lightening of flock of swans,
Their feathers roughed and ruffling, white on white,
Their fully-grown headstrong-looking heads
Tucked or cresting or busy underwater.
Useless to think you’ll park or capture it
More thoroughly. You are neither here nor there,
A hurry through which known and strange things pass
As big soft buffetings come at the car sideways
And catch the heart off guard and blow it open.