The Making of a Painting 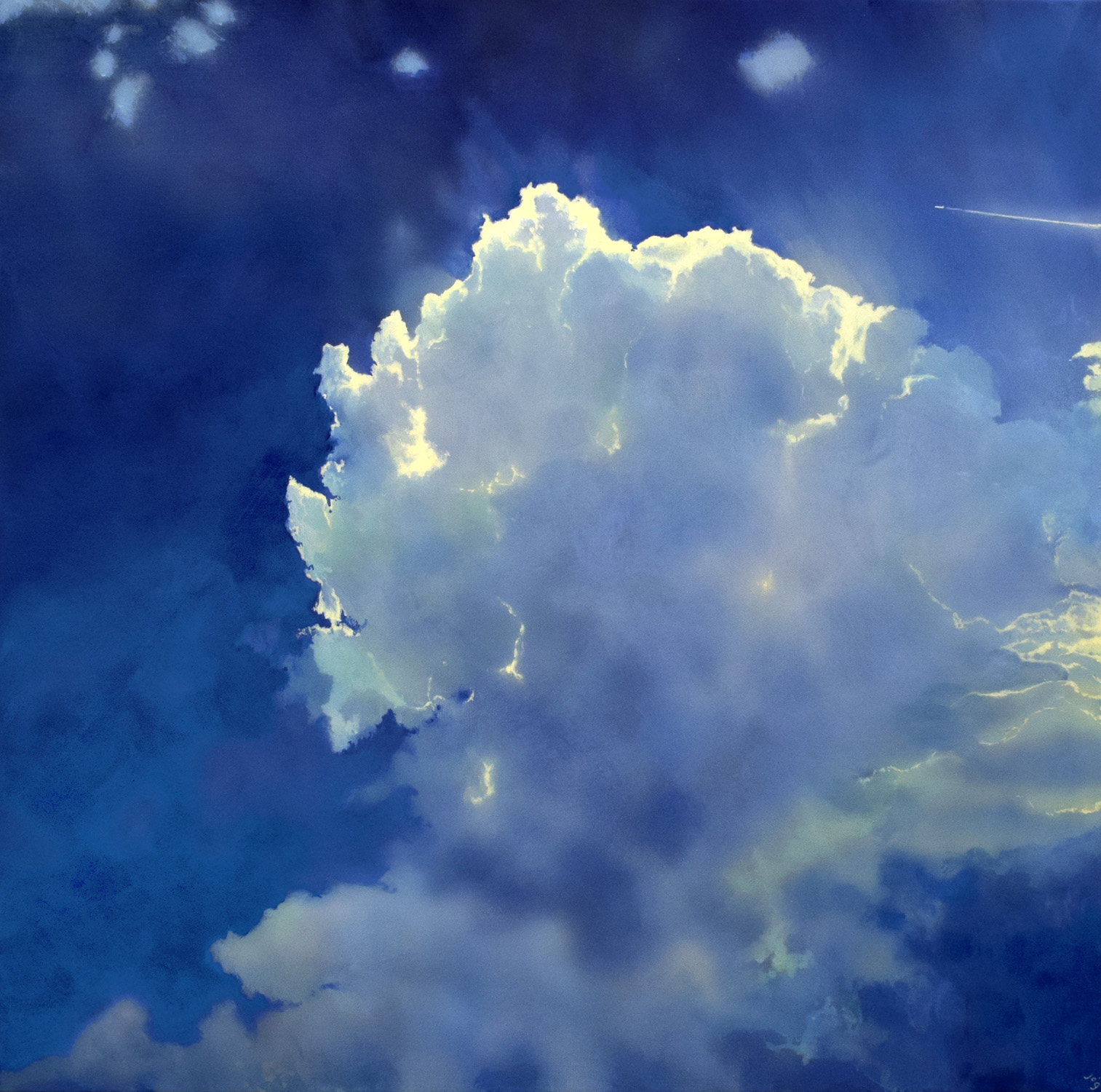 The journey a painting takes is often one of a winding path with culs-de-sac and odd moments of freewheeling breakthroughs.

You may find it interesting to discover a visual diary of this journey.

I hope you enjoy it. 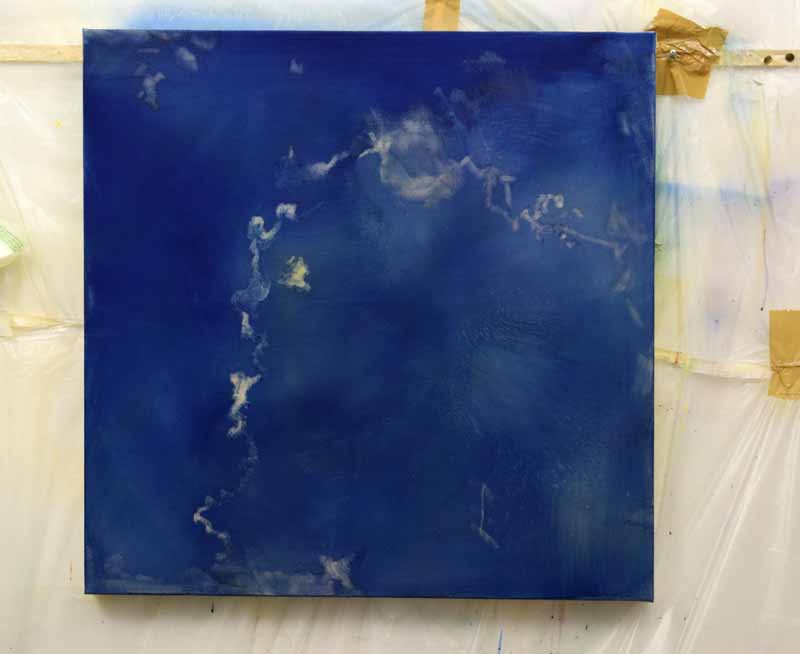 With a large flat brush. I wet the blank canvas and then ran on each side, along the edge a line of colour: Egyptian violet, Prussian blue, cerulean blue and Paynes grey.

Using the large brush and starting from the top, I made horizontal strokes across the canvas.

Next, I turned it 90 degrees and repeated the action.

Result: a movement of midnight blue on the left and lightish blue to the right you might be able to see in the painting.

While the paint was still wet, I wrapped a wet cloth around my index finger and lifted out shapes of light, some with hard edges and some with soft.

When I took the first photo, the form highlighted reminded me of a map of France. 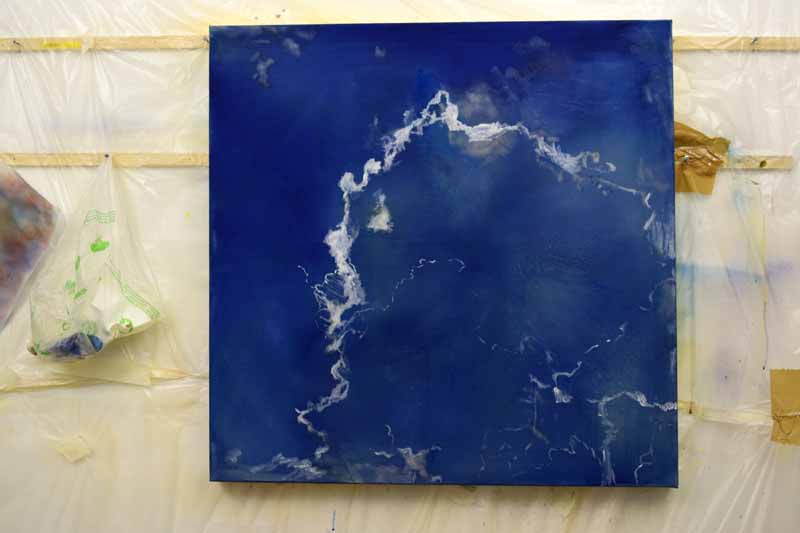 After the painting had dried, I took a smallish brush loaded with a light blue-white and very quickly and intuitively made lots and lots of quick marks, rounded in form, building up these squiggly lines into cloud-like shapes.

I had in mind to make a new Icarus painting though here, it’s larger in scale.

When I had finished this stage, I felt like energy and a diaphanous quality was beginning to appear. I was feeling quite good about my map of France cloudscape. 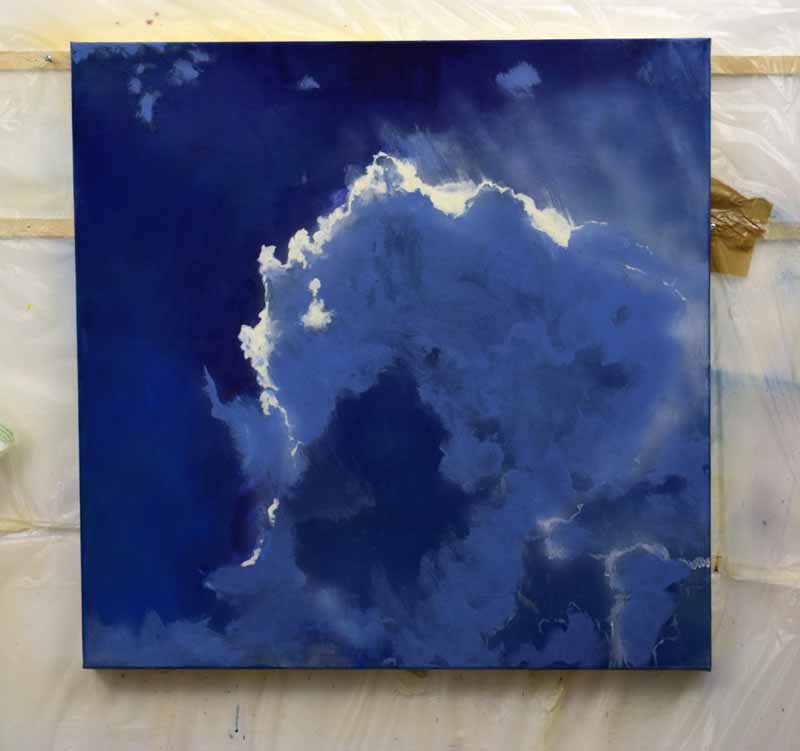 The following day, I needed to build up the contrast in negative and positive space between cloud and sky.

With Paynes grey and pthalo blue lightened with titanium white, I worked in with a large brush.

I find at this stage blocking in with a large brush gives an energy to the piece and avoids getting too fiddly too early.

Once the cloud shape was blocked in, I roughly filled in a back-lit light to surround the cloud with yellow medium azo and titanium white.

It was time to take stock.

I liked the way the shape had movement as if it was slowly tipping to the right.

I liked the shape of the leg jutting out into the midnight blue sky. It also acted as a counterbalance to the large mass tipping to the right.

I felt the blue worked in the cloud and to some extent so did the filigree.

The cloud however was too heavy and dense and the dark blue shape in the centre didn’t work for me. 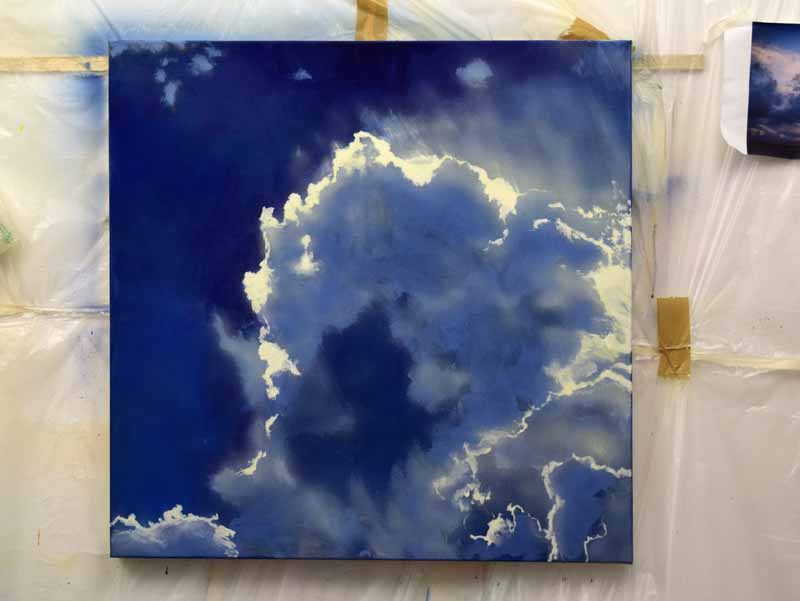 Today was about trying to inject some lightness and light into the heaviness of the shape.

I added top right some vaporous diagonal movement as if taken by the wind and worked on the light around the cloud.

To create interest, different shapes with hard and soft edges help keep the eye moving around the painting.

Then, to bring light into the main body of the cloud, I applied a glaze of very pale yellow followed by a pale blue.

At the end of the day, my feelings were one of resignation. ‘Oh no, here it goes again, I’m entering the difficult getting stuck middle phase so many paintings go through.’

Before leaving the studio that night, I remembered Hemingway’s wise words from his book ‘Moveable Feast’. He finished a day’s writing by leaving a sentence or paragraph half finished, so he knew he had a way back into the work the following day. (Please see below) 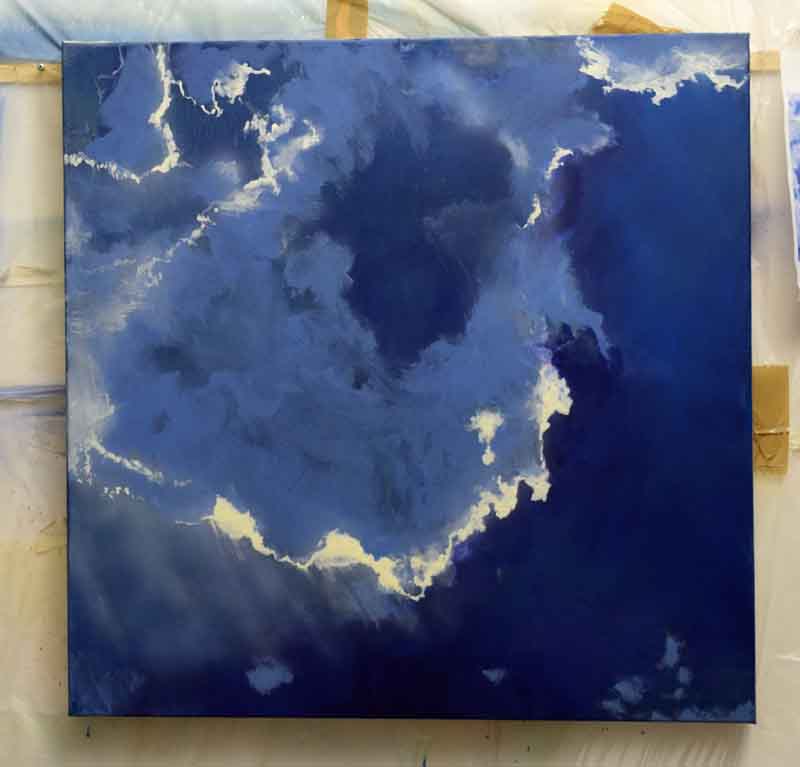 I turned the painting upside down and found the negative space had reversed and the cloud had now become the sky and vice versa.

Quite excited at the energy in the shapes, particularly the cloud rising into the sky top left, I started to work on the filigree just a little and then stopped, knowing I had, à la Hemingway, a way into the painting the following day. 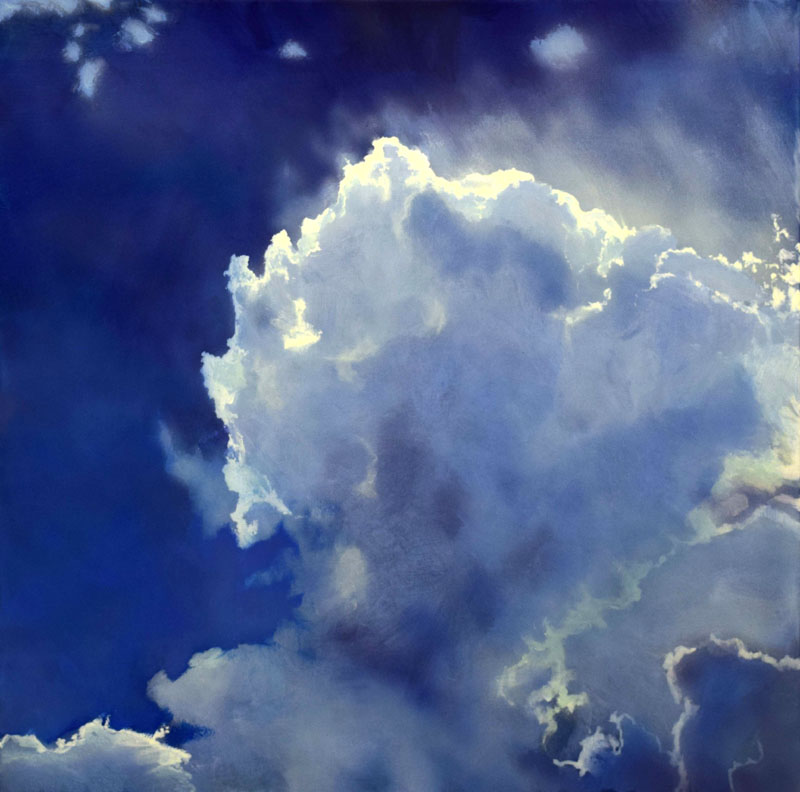 My upside down painting didn’t thrill me at all but as promised the night before, I carried on working on the filigree around the cloud.

When completed, I turned the work back around again.

That looked much better.

In retrospect, this stage was the day when the painting took on some freewheeling momentum and it began to finish itself.

After adding shapes in the cloud with glazes of light and dark, I started to notice transparent qualities and movement. 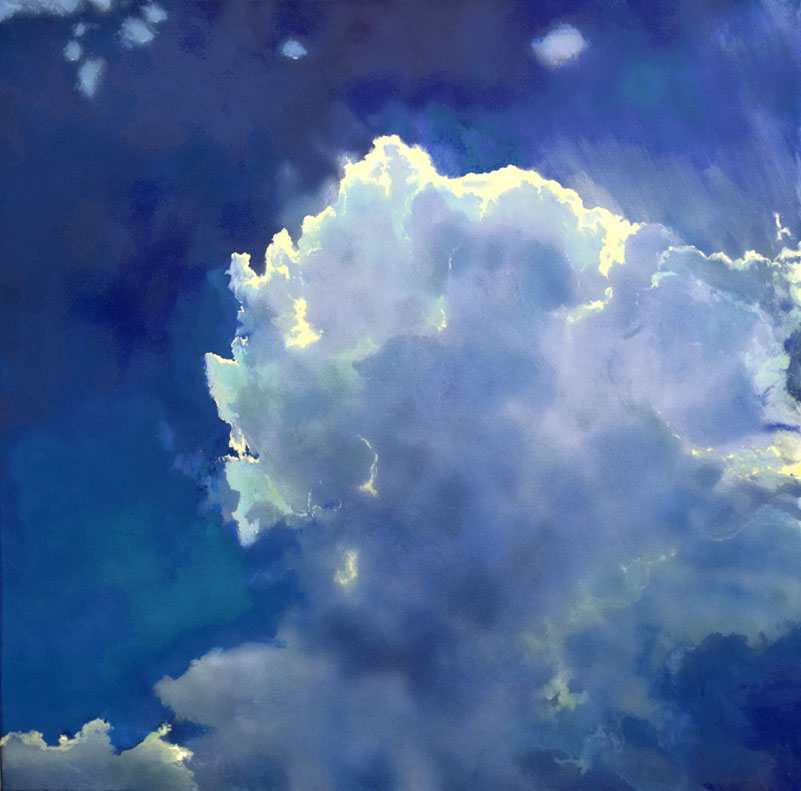 The shapes had pretty much taken hold.

They felt balanced and harmonious but I wasn’t happy with the overall blueness of the cloud next to the sky.

I needed that increased range of colour to give it that mutable quality.

Glazes of rose and teal were added into and over the blue, shifting the colours slightly.

Areas of light broke through the cloud again breaking up the overall shape.

Blue green was added into the sky bottom left to anchor the painting.

The cloud was now glowing. 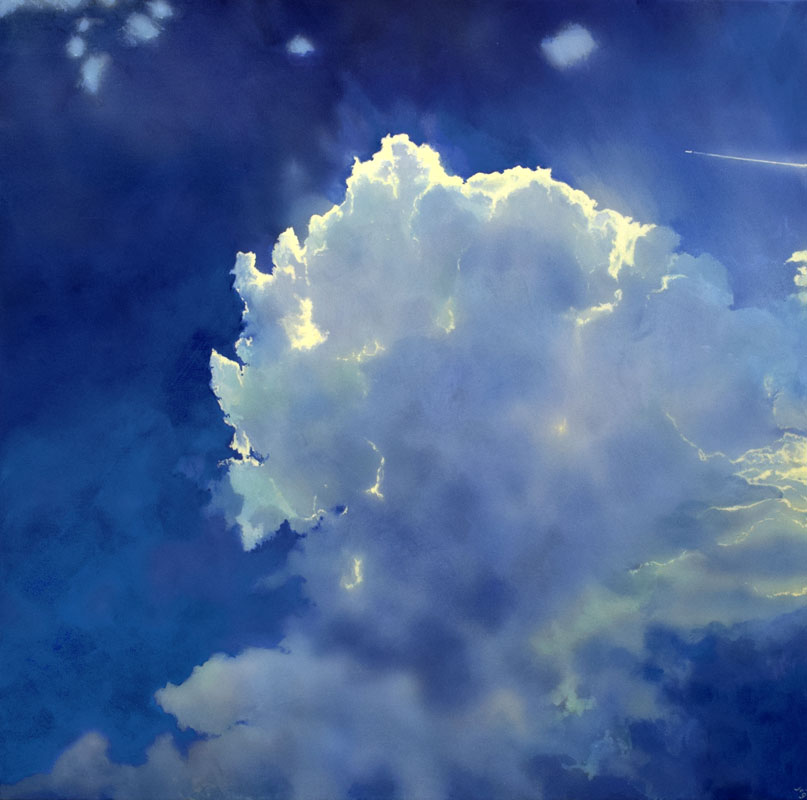 I added more warmth with a light golden yellow over the rose and teal in parts. This created the perfect counterpoint to the deep dark blueness of the sky.

Last of course, I placed my tiny craft in the sky, dwarfed by the immensity of nature.

I tried to place it three times in various parts of the painting and eventually found the most pleasing place.

And to give you an idea of the painting’s size: 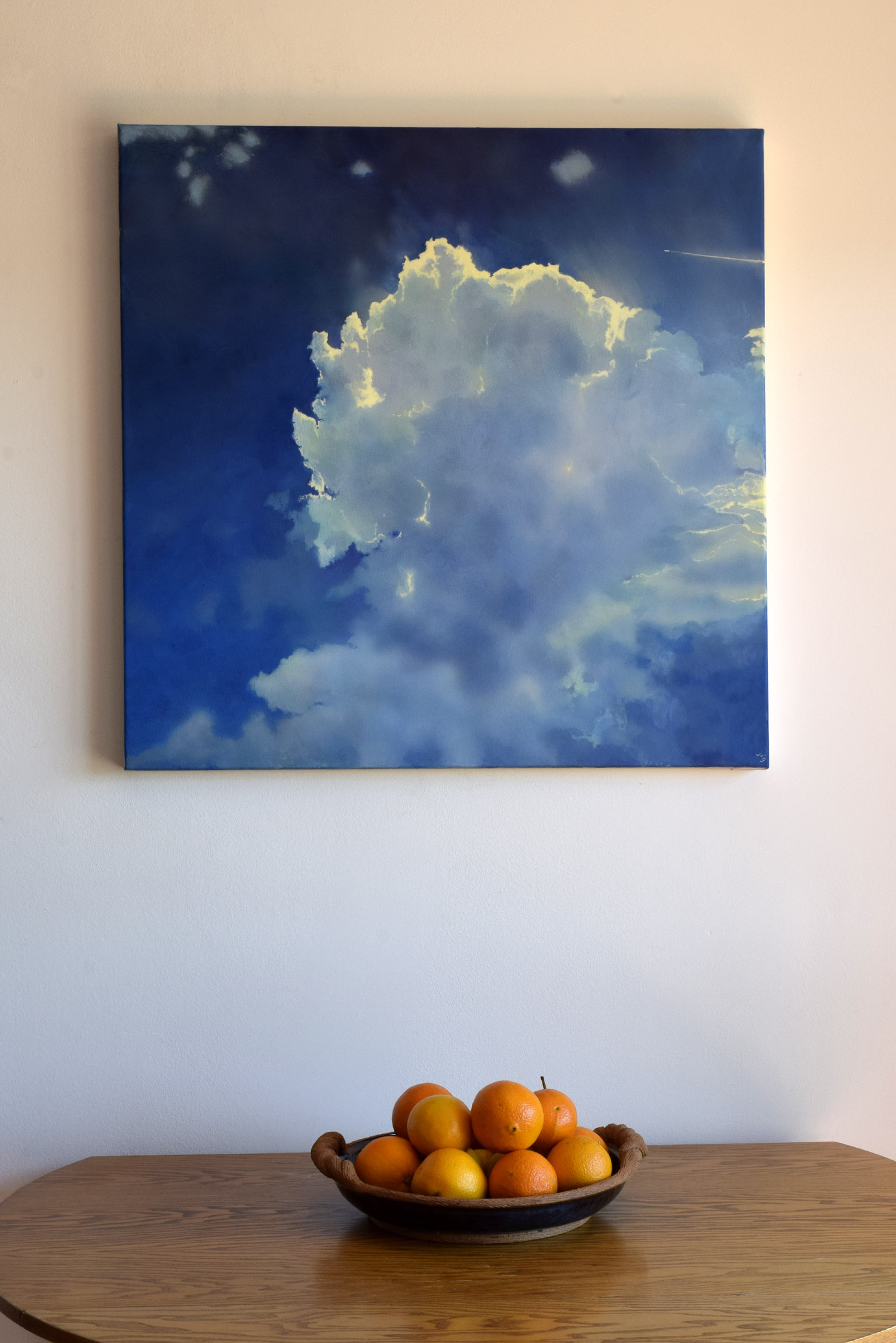 I’d love to hear what you think of this journey of a painting. Do let me know.