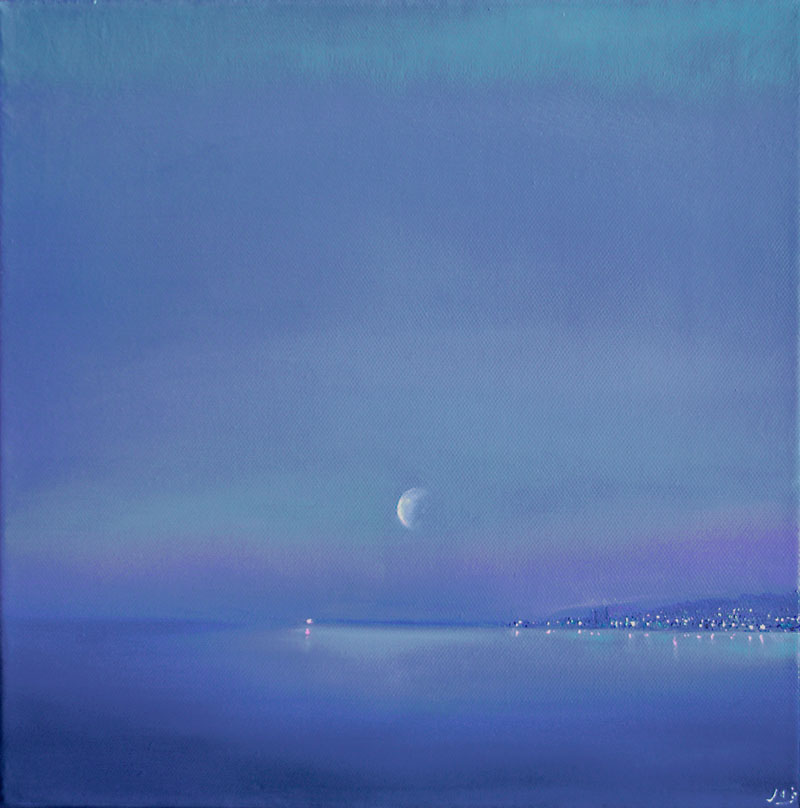 To start a painting is simple in theory but not so easy in practice.

Today I created a blue that did just that. Not because I wanted to make a colour for the sky but purely because of the emotional high that blues contain. Often they release in me a direct and visceral response when layed down on canvas and then other colours tumble out. It’s great when this happens, it’s a bit like having a good conversation that flows nicely.

My blue was a muted blue/violet grey.

As soon as it was on the canvas, mauve, turquoise and rose followed quickly. The colours were graduated and diffused. The coolish light of an Irish twilight sky and sea appeared before me in an instant.

I was now in the painting. Across the water I could see in my minds eye the port gradually being enveloped in darkness and the lights coming on punctuating the twilight while slowly the full moon rising was spreading a cool silver blue light across the water.

You may wonder what this previous paragraph say about painting and its process. In this case, the painting reveals itself after it is made, whereas often painters start with the end in mind and choose a subject to paint.

What the painting revealed is that the piece perhaps is concerned with the passage from light to dark, a reoccurring theme in my work. it’s the special time when the seconds passing can be fully brought into clear focus if we stop to notice.

This time is the cusp when material becomes immaterial. This can be incredibly moving as our eyes adjust to the dark and other colours gradually appear that we often miss in the full glare of daylight.