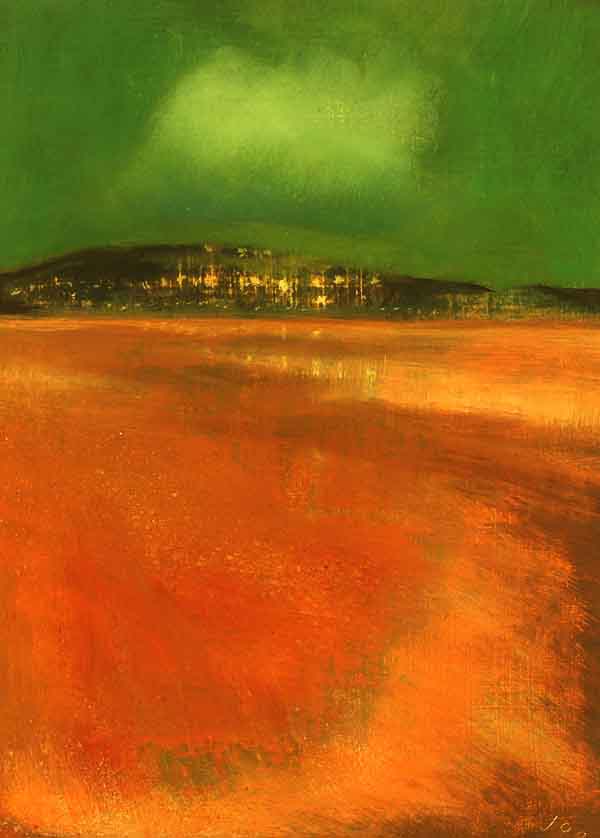 Leonardo’s technique was not just his idea alone, many other Renaissance artists adopted devices to create new works.  Seeing shapes in clouds, faces in rocks, all encouraged the viewer to search for meaning in chaos and potential art in accidental shapes. Clearly Da Vinci used the stains on walls to create new worlds, new vistas.

My painting in this post “Low Tide” brought to mind the great man and his creative methods.  It started life as a study for a tree, which ended up being scraped off as it just didn’t fly.    I had left some residual paint in an area of potential interest. The painting had been sitting on my picture rail for the last two months wondering what to do with it when one evening, as I walked into my studio and glanced at this board, I saw twinkling lights on a distant headland.

The interesting part was why I hadn’t seen this potential before; was I still seeing the board as a tree study, or was it the diminished light that opened to me, as Da Vinci stated “a new invention”?

I found a way back into the painting.  What was the green of the tree became sky and a cloud whose shape, already there, just had to be  refined by lightening its colour.  The bottom right foreground showed some of the underpainting’s directional marks that reminded me of marks and water pools on a beach at low tide.

New ways of looking can trigger the start of a new art work as Da Vinci, stated:  “When you look at a wall spotted with stains…you may discover a resemblance to various landscapes, beautiful with mountains, rivers, rocks, trees. Or again, you may see battles and figures in action, or strange faces and costumes, and an endless variety of objects which you could reduce to complete and well-drawn figures.”

Really, with an open mind, you can get inspiration from anything.

What do you think? I’d value your comments.