American Tonalism and the Smell of Coconut #94 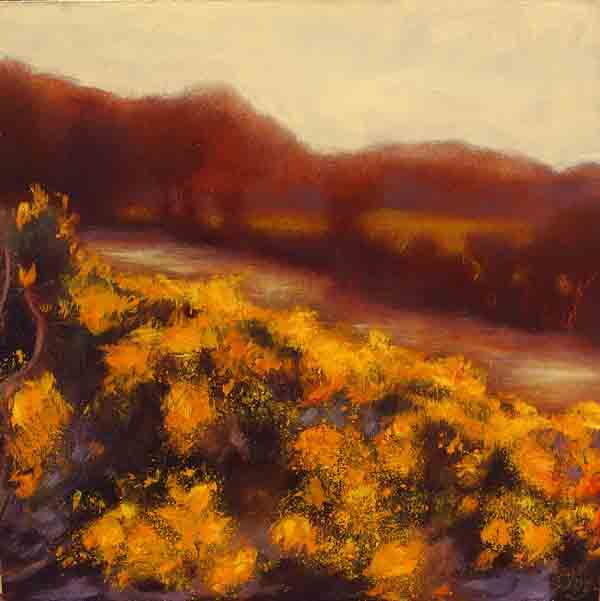 You may wonder what American Tonalism and the smell of coconut have in common.

This painting is from my memory of the vibrant warm yellows of the Irish landscape where gorse is abundant and its coconut-like fragrance fills the air.

When I think of Ireland’s Landscape, a particular time of day immediately comes to mind: evening. With it’s rich earthy colours, this is what I was trying to capture, filtered through distance and time.

While I was working on this piece, I thought of the American Tonalist painters.  These artists were concerned  with creating a poetic vision of landscape by evoking the feelings of reverie.  Often painted from memory, they sought harmony through colour, a particular overall hue or atmosphere such as mist. They wanted to get a uniform tone throughout the work.

The Tonalists favoured scenes set at dawn, early morning, dusk, twilight or evening to take advantage of the particular atmospheric conditions at that time.

They painted at around the same period as the Impressionists though their approach was very different. The Impressionists placed one colour next to the other to create vibrancy without  blending. The Tonalists often mixed their colours after applying them to achieve a rich unified picture surface.

The seasons most often depicted were late Winter, Autumn or early spring to avoid strong saturation of light.

Below is a beautiful work by George Innes. 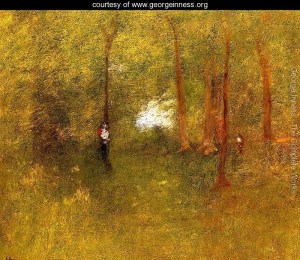 George Innes was an American landscape painter born in Newburgh, New York on 1 May 1825.
He died at Bridge of Allan in Scotland on 3 August 1894.

And the link between the Tonalists and the smell of coconut, I hear you ask?

Have you ever smelled something that takes you right back to a particular place and time?